The people of Virginia have many choices when it comes to following sports, but which do they favor? We’ve ranked the top five sports according to local fans.

Football takes top spot in Virginia, with the state’s fans lucky enough to have the NFL’s Washington Football Team on their doorstep. Taking second place, golf is another sport of prominence in Virginia. Basketball, soccer and baseball cap off the state’s top five. 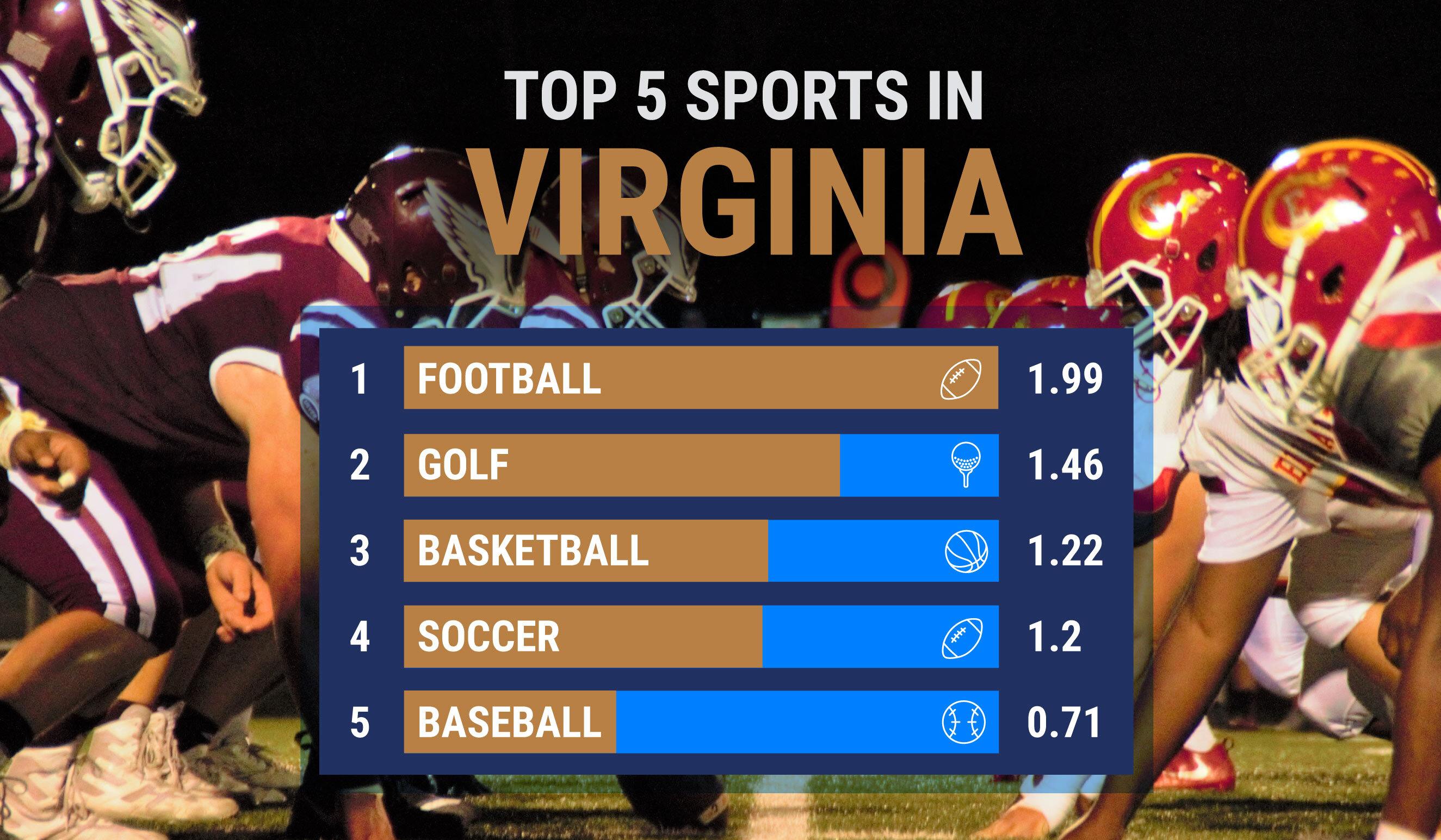 There’s no doubt about it – Virginia has football fever! The three-time Super Bowl champion Washington Football Team is headquartered in Ashburn, which has helped earn the club a dedicated following statewide. The team has more than 600 NFL wins, a feat only matched by four others in the league. The University of Virginia and Virginia Tech college football teams also have huge fanbases.

Virginia boasts a rich and diverse array of courses, suitable for casuals and serious players alike, so there’s little surprise that golf makes an appearance as one of the state’s top five sports. Whether it be heading out for a quick 18 holes or enjoying a summer-long golfing tour of the greatest spots in the state, Virginia really does offer it all.

Basketball is one of Virginia’s favorite sports, largely thanks to a nearby NBA team, the Washington Wizards. Additionally, the University of Virginia’s Cavaliers, who play at the John Paul Jones Arena in Charlottesville, won the NCAA men’s basketball national championship in 2019. Virginia Tech, VCU and Richmond also have had success in college basketball.

Washington DC-based club DC United helps to place soccer within Virginia’s top five sports, with the local team capturing audiences statewide. The soccer franchise has won the MLS cup four times, including three in a four-year period between 1996 (the league’s inaugural season) and ’99, as well as 2004.

Baseball sneaks into Virginia’s top five sports, taking the final spot, with fans of the sport drawn to local DC team the Washington Nationals. The franchise used to play north of the border as the Montreal Expos, but relocated to the nation’s capital in time for the 2005 season and won their first World Series title in 2019.

To bring you Virginia’s five favorite sports, it was first important to consider both Google search volume data and social media sentiment data for each sport. Giving each of 10 different sports a value for each of these two factors, we ranked them accordingly. From here, each Virginia sport was assigned an index score between 0-1, relative to their ranked position, for each of the two factors.

By combining the two index scores, we were able to give each sport a score between 0-2 to find the top five across Virginia.

How Did Virginia Sportsbooks Fare in 2022 and Which One Leads Pack?

Bills For Virginia Casino Project in Reston Proposed, Then Rethought

Cited by leading media organizations, such as: