Virginia is home to so many sporting icons, but have you ever wondered who the locals revere the most? We’ve uncovered the top five hometown heroes for Virginia. 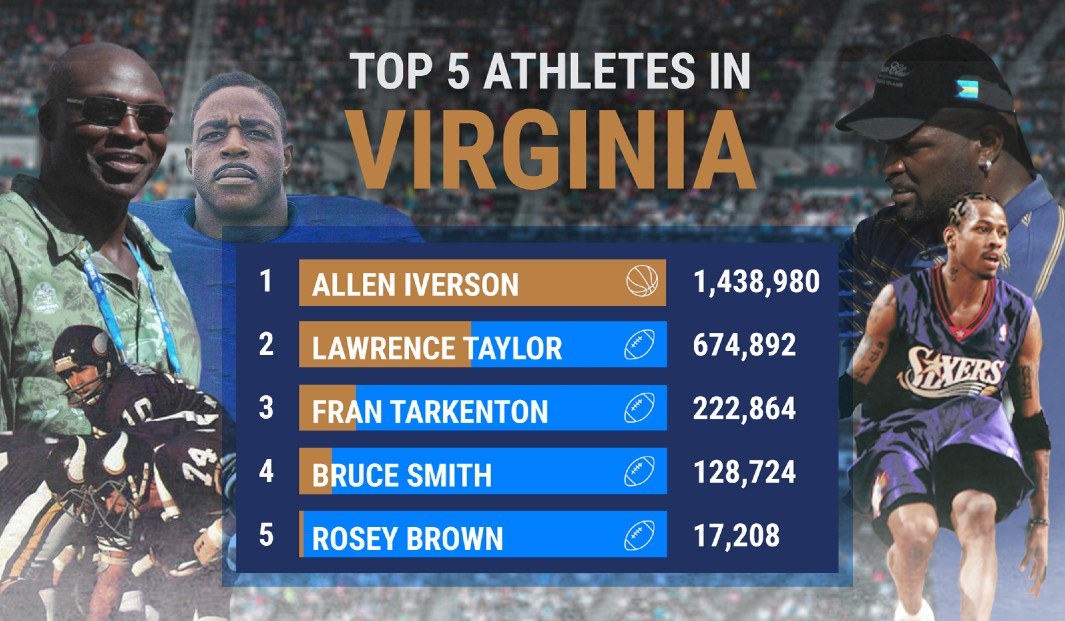 Learn a Little More About Each Hometown Hero

Ranked the No. 1 athlete to come out of Virginia, Allen Iverson enjoyed 14 successful NBA seasons between 1996-2011, spending most of his time with the Philadelphia 76ers. One of the league’s most consistent scorers during his playing years, Iverson was even named NBA MVP in 2001.

One of Virginia’s favorite sons, Lawrence Taylor enjoyed a fruitful football career as part of a Giants team that earned Super Bowl titles in the 1986 and 1990 seasons. One of only two defensive players to ever win NFL MVP, Taylor is considered one of the greatest players the league has ever seen, earning him hero status back home.

American football icon Fran Tarkenton grew up in Richmond before a successful 18-season career as an NFL QB, spanning the 60s and 70s. During this time, Tarkenton earned the coveted crown of NFL MVP in 1975, along with a bucketload of additional personal honors. In retirement, Tarkenton was also a broadcaster on Monday Night Football in its early years.

Born and raised in Norfolk, Bruce Smith attended local school Virginia Tech where he earned a place in the College Football Hall of Fame for his playing heroics. Smith was part of the Buffalo Bills team that made four consecutive Super Bowls, but unfortunately lost each time. Considered a great of the game, Smith’s accomplishments immortalize him as a Virginia hero.

Charlottesville-born Hall of Famer Rosey Brown enjoyed a glittering 13-season long NFL career with the Giants as their left tackle from 1953-65. During this time, as well as helping his team to six division titles, Brown tasted ultimate victory as an NFL champion. Named to the ‘50s team of the decade, Rosey Brown is still a household name for football fans across the state of Virginia.

To rank Virginia’s top five hometown heroes, we first collected data around the state’s most successful and prodigious athletes from Bleacher Report. From here, we analyzed each athlete’s Wikipedia page to assess visits during a twelve-month period between March 2020-March 2021. The athlete with the most page views during this time period is considered Virginia’s leading hometown hero, with the next four making up the top five.

How Did Virginia Sportsbooks Fare in 2022 and Which One Leads Pack?

Bills For Virginia Casino Project in Reston Proposed, Then Rethought

Cited by leading media organizations, such as: